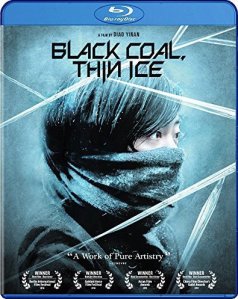 “With more than 30 premieres and 20 awards from top film festivals around the world, BLACK COAL, THIN ICE is the story of a disgraced cop and his partner, still seeking the truth behind the high-profile murders that ended their careers – because it seems the killer is at it again…”

The story of Black Coal, Thin Ice basically revolves around a cop, and his partner. Both of their lives have been ruined, and their careers disgraced, due to of one of their murder cases going terribly wrong in the past. Now, in present time, a new case comes around that has many similarities to the one that ruined their careers years ago. The two decide to start looking into the new case to finally solve what they couldn’t before. This movie was done really well, in my opinion. It was dark, gritty, quiet, and had many surprising twists and turns. Once I thought that I finally understood everything, the story decided to switch around and throw another surprise at me. It’s a fairly quiet movie, with most of the story being told through the facial expressions, and body movements, of the actors. Now, while were on the topic of the actors, they were great. Both the lead male, and female characters, were really intense throughout the movie, making hard to figure out what was going to happen next. As far as the Bluray itself, the Picture Quality was gorgeous. The dark and snowy setting throughout the movie, looked beautiful. The Audio Quality was as good as it could be, even though a majority of the film was in silence. Unfortunately, there aren’t any special features aside from the trailer and previews. It would’ve been nice to have seen how the actors got into character. Overall, I had a pretty good time watching it. A lot of scenes were very intense and surprising. The whole thing had a gritty feel to it, which had me on the edge of my seat from time to time. I would recommend giving it a watch.